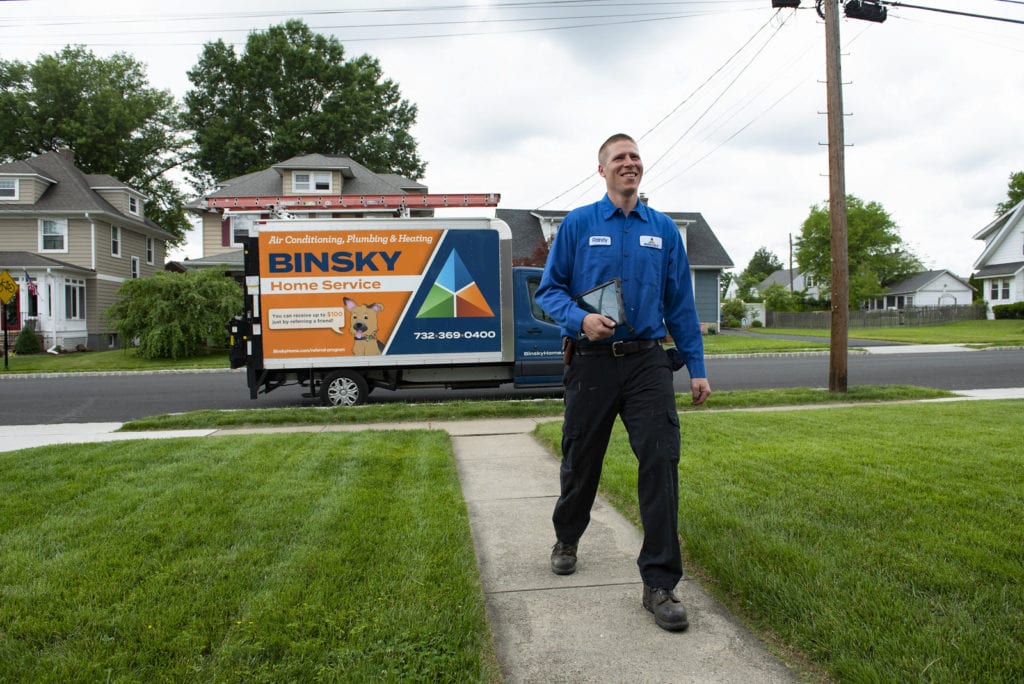 A common call we get from Princeton homeowners is “My AC won’t turn on. Help!” So it was no surprise when Wayne L., a homeowner in Princeton, called saying he had no cooling during a terrible heat wave. We dispatched our technician, Kenny, right away to fix the AC. Upon arrival, Kenny first needed to find the cause of the problem. This is called performing a “diagnostic”. While investigating the entire system, Kenny found several issues, including:

Let us briefly explain what those parts do.

Your air conditioner has a blower that delivers cooled air throughout your home. Inside this blower is a fan, which, no surprise, can only start if the fan motor works. Wayne’s fan motor was busted, meaning his AC blower could no longer deliver cooled air.

A capacitor is kind of like a battery: It stores electricity and releases it to help a motor start.

If you combine these capacitors into one housing, you get a dual capacitor (they’re combined to save space).

Capacitors are usually connected to the fan motor and the AC compressor, which is the “heart” of the AC, pumping refrigerant throughout the system. When capacitors go bad, these motors have trouble starting and staying on.

The solution: Replace the motor and the capacitors

Once Kenny found the issue, he gave Wayne of all his available options. Since it would be a costly repair, Kenny advised that Wayne look into replacing the system. Wayne considered the suggestion but ended up choosing the repair.

Kenny ended up replacing the motor and both capacitors. Finally, he ran the system and made sure everything was running properly before leaving.

Note: Keep in mind that the cost and time to fix an air conditioner all depends on what’s wrong with it. There’s no one-size-fits-all approach. If your air conditioner isn’t turning on no matter what you try, the first step is always to have a professional diagnose what’s wrong.

Original Price$197.50
Savings-$99.00
Sale Price$98.50
Is your A/C system blowing hot air or not working properly? What you get from Binsky Home Service:
• We'll come to your home
• Diagnose the problem with your A/C system
• Provide a comprehensive report on the problem
• Present you with personalized solutions on what to do next
• Binsky Home Service ensures 100% customer satisfaction on all repairs & installs
* Sunday / After-Hours / Holiday Rates are higher - please call for details.
(732) 724-1784